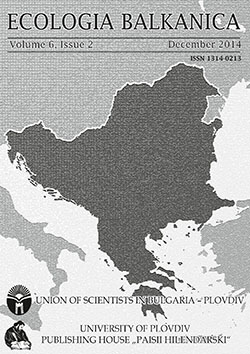 Vegetation Analysis in the Red Sea-Eastern Desert Ecotone at the Area between Safaga and South Qusseir, Egypt

Abstract. The current work is concerned with the studying the impact of environmental conditions on the vegetation in the arid ecotone located between Red Sea and Eastern Desert from Safaga to south Qusseir. Ninety eight quadrats inside 13 transects were selected to cover the environmental gradient across the ecotone, from the coastal region to the boundary of Eastern Desert. Forty five species were recorded belonged to 24 different families and 38 genera. The perennial species were 38 while the annuals were seven species. Zygophyllum coccineum had the highest presence value (89.8%) followed by Tamarix nilotica (56.1%) and Zilla spinosa (51.02%). Chamaephytes and Hemicryptophytes were the most prevailed life-forms. Chrological analysis exhibited that SaharoSindian and Sahro-Sindian with its extension to Sudano-Zambezian elements were the most dominant. TWINSPAN classification technique produced three vegetation groups include nine clusters at the fourth level. These groups identified according to the first and second dominant species as follows: Convolvulus hystrix - Panicum turgidum, Tamarix aphylla - Limonium pruinosum and Nitraria retusa - Tamarix nilotica. DECORANA results indicated a reasonable segregation among these groups along the ordination axis 1 and 2. Vegetation analysis showed that ecotonal clusters have highest number of species/cluster, high species richness and high species turnover. Therefore, the largest group existed in the ecotone (34 species) while the desert group contained eight species and the coastal group included three species. Among the estimated soil variables in this study, pH, coarse sand, HCO3-, SO42- , clay and PO43- have the highest effect on species distribution. Sodium adsorption ratio (SAR) was the effective factor in detecting the ecotonal species, Aeluropus lagopoides and Limonium pruinosum.